Patek Philippe has just released today a new array of its annual novelties, expending its casual trend (and touch!) to several models from its classical line-up. Of course, the star of the show is certainly the new Patek Philippe 5811G Nautilus which has the difficult task to replace the previous 5711 family. However, very attractive versions have been added to existing models, among which the green dial 5204G (QP, Split-second chronograph) or the 5935A World Time, Chronograph which is a steel version with Salmon dial of the 5930. The ladies have received a nice “Rainbow” gem-set Aquanaut with a Chronograph complication as well.

Among traditional brands, Patek has taken around 10 years to evolve and create its “3rd way” between more traditional watches and the sporty lines. The dials, straps and style they have been bringing, especially since the last 5 years, make them in phase with today, our needs, designs’ evolution, hence making the brand even more appealing than ever. It’s the expression of their genes and preserved timeless style.

I said in April the Watches & Wonders novelties were stunning but it seems they weren’t finished yet. Those releases keep exciting watch lovers on and on. Thus, let’s have a quick overview of the annoucement before we can get live pictures (because official pictures rarely equals the experience in the metal).

Have a nice read!

Nota Bene: all the pictures are from Patek Philippe’s official press release. Of course, you can also find more on Patek’s website.

The Nautilus 5811G has just been released, in white gold, with a blue dial that looks like the 40th anniversary’s (as the date font) as well as the 5740G’s (QP). Patek defines it as a sunburst blue with a black-gradient rim.

The 5811G is 41 x 8.2mm (10h-4 o’clock). This means that while it takes +1mm in width (which follows the increase of wrist sizes and covers an increased clients demand), it’s suprisingly 0.1mm thinner (the 5711 was 8.3mm). Hence, the brand deliberately chose to change its proportion slitghtly to make it look slimmer, hence more refined.

White gold brings a very nice color to these metallic watches and pushes toward giving precious material their own place in a Patek world were steel has a strong value as well. For people who are used to seeing pictures of the 5711, the photo below shows quite clearly a thinner look concerning this 5811G.

On a side note, it is a 2-part case (like the 1976 original concept) and it is integrated with a “new pull-out lever system enabling the winding stem to be removed from the dial side, without requiring access through the back (patent pending). This design is designed to replace the previous “split-stem” system”. I guess it is convenient for watchmakers in charge of servicing the watch.

Finally, the men’s Nautilus is also equipped with the new easy-set buckle (picture below), allowing to adjust the bracelet’s length by 0/+4 mm (+2mm on each side). I wrote an article you can find here about this quick-set feature and the new buckle’s locking mechanism (introduced in 2018 and 2019).

Cufflinks have been updated with the material and colours of this new model.

The 5811G Nautilus on Patek’s wabsite

The 5712/1R also gets updated with the new lockable adjustment system (picture below, dedicated article here).

The steel 5990 Nautilus is now provided with a fantastic dark blue dial and its black-gradient rim.

The 5935A is offered with a Salmon “rose-gilt” opaline dial. Hence, the color should be the same as this year’s 5320G and 5172G. The hands and numerals are blackened.

As seen above, the watch is offered with 2 straps (as they started to do with the 5326G earlier this year):

It’s interesting (and refreshing) to see the brand providing different colours and material for straps. It was high time. The strap is equipped with a steel deployant buckle, which is quite rare at Patek to say the least.

This 5204G is the first version in white gold (previous versions were in platinum and rose gold) and offers a green dial that seems to look fantastic. It would be the kind of light grey green that remains very subtle and appealing, like seen in the 5905A and 5205R lately.

When talking about straps, this one looks perfectly paired with the dial. It seems that, aside of the material, the finish is also leaning toward matte or satin nowadays.

I particularly like how the white markings contrast with the dial (like the 5172G blue, the 5170P or the 5205G blue for instance).

From the back, we can admire the fantastic 29-535 caliber in its Split-second version.

Patek 5373P Split-second chronograph, Perpetual Calendar with the crown on the left

This exceptional piece, part of the Grandes Complications, offers a very flat movement considering its complexity (7.3mm thick). The crown and monopusher used for the split-second function is placed on the other side on this model (like their similar unique 1927 piece). It will be a limited output (but not a limited edition).

It has a charcoal grey dial with black-gradient rim and ebony black snailed counters.

It’s sometimes difficult to be aware of what is different or “superior” in movement or craftmanship complexity. The cases are increasing in size and some owners are asking for bigger calibers. The problem is that watch making is about miniaturisation (especially since pocket watches) and both seem to be contradictory. Hence, we sometimes tend to forget or to have difficulties in recognizing what is exceptional in having a smaller complicated movement. The 5373P and its movement belong to this ultimate category for sure and its case is 38.3 x 12.93mm.

Please note that, because of the correctors placed at 6 o’clock, the little 6 o’clock diamond (inserted in Patek’s platinum cases) is placed at 12 o’clock on this reference. Well, it’s certainly a consequence I think of the movement being rotated from the 5372 reference. Still, it’s nice for people wearing their watches on the right wrist to have something that suits their habits.

The Patek Philippe 7968/300R is the first chronograph in the “Luce” (ladies) Aquanaut line-up. Women are more and more interested in complicated watches and the offer is being expanded year after year. Hence, the model receives now the in-house 28-520 caliber.

It’s offered in rose gold with “Rainbow” gem-set bezel and markers made of sapphires and diamonds, paired with a mother-of-pearl dial. The case is 39.9 x 10.37mm and is 30m water-resistant.

The 7968/300R is provided with 3 straps (cf. picture above) and a rose gold diamond-set deployant buckle.

This new Nautilus version for ladies (35.2 x 8.62mm) is offered with different shapes and colors of spessartites (bezel, indexes). The colours are called “champagne” and “cognac”. Santé!

The watch is 60m water-resistant. 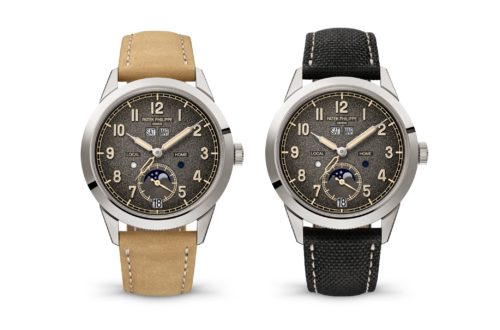 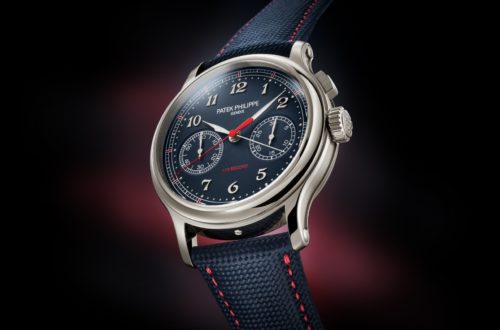