It wasn’t loudly announced during the 2019 Baselworld fair but the new Patek Philippe 26-330 caliber has been released. It was introduced inside a 2019 novelty (5212A Weekly Calendar) as well as an update to existing references (the 3 remaining 5711 Nautilus in the catalogue). Moreover, some of its new features have been added to the new 5520P Alarm’s movement.

We can of course expect that the 26-330 will be extended to the other references in the future as a successor to the 324 caliber.

As usual with Patek Philippe, and despite what its very traditional image might suggests at first, the manufacture’s watchmakers continuously improve their calibers. They follow their own R&D process. Neither too fast, nor too slow and doing as such with usually clever moves, dealing astutely with tradition and technical evolutions.

This caliber base isn’t new but has certainly significantly evolved in terms of timekeeping and reliability since:

As they are used to, Patek watchmakers find smart improvements, yet as simple as possible, and only if it enhances accuracy, reliability or setting ease.

You can recognize whether it’s a 324 or a 26-330 from the winding rotor’s shape. By the way, you can first notice on the 26-330 picture that the rotor central axle locking mechanism has changed (more secure compared to the previous screw).

However, these similar characteristics hide the fact there are 3 main areas in which the brand has implemented new distinctive features:

It might look a little technical but once understood, it helps appreciating more what PP is all about and the invisible, beautiful and small technical features our watches contain.

From the “324” picture and the “324” plastic model picture further below: until now, in order to prevent the central seconds-hand from vibrating (at each “tic”) due to the usual gap between 2 wheels (Fig.1), its standard wheel (in the light purple square, Fig.3) was “controlled” by a classic friction spring applied on a pinion (Fig.2 and the lower part is visible on Fig.3).

However, because friction should be avoided (wear, metallic residue spread, energy waste) and to ease the setting phase, Patek has developed a very technical and quite beautiful wheel (see the light purple square in the “26-330” picture below) in order to replace several of the elements implied.

To make it simple, as illustrated in the “26-330” plastic model picture below, each tooth is split in 2. It creates this small blade that remains applied against the opposite wheel’s teeth. The gap is thus always filled thanks to the bending blade.

Because of its size, it is made via the LIGA process; material growth from a Nickel and Phosphorus alloy. Later on, it is gold-copper-iridium coated.

I didn’t bring my ruler at the presentation but the wheel diameter should be around 3mm and the small blades (shown on the “plastic model” picture) are 0.022mm “thick” in the (micro) metal. I have a good vision from close range but it is unbelievable how thin these blades are.

When I asked why the power reserve didn’t increase in the process, I was explained that Patek’s watchmakers decided to keep the saved energy for improving the time accuracy.

Indeed, the potential power reserve increase wouldn’t have reached such a level it would have amounted to a full day. Indeed, gaining 5 or 10 hours wouldn’t have helped anyway to last from Friday evening to Monday morning (max. 45h base). Furthermore, even with a 60-hours power reserve movement, it is usually better to wind it daily because of the lower timekeeping capabilities in the last third of a reserve.

For those who like figures, and thanks to the energy gain, the balance wheel has been modified. Hence, its inertia has progressed from 4.7 to 5.5 (like in the 215 caliber). Meanwhile, the friction decrease brings around 40° of balance amplitude.

We sometimes wonder about whether brands should be using modern tools and applying modern techniques for traditional watchmaking. There might be limits but this example is the kind of improvements that wouldn’t have been possible before because of its dimensions. Aside from looking nice.

Last but not least, jewels were added to the seconds-hand pivots.

From Mr Barat (Head of Watch Development at Patek Philippe), this is the main evolution inside the 26-330 caliber.

Inside this section, let’s have a look at 3 additional improvements applied to the winding system (see picture below):

– A declutching module (called below “Uncoupling reduction wheel”) for the manual winding use (a.);

In practice, we often wind manually our automatic watches (e.g. when it was stopped (unused for a while) or to prevent it from running out of energy before the next time, like during week-ends).

The downside of the previous system used in watchmaking (sliding flange) is that it produces wear and residues on the long run.

In the 26-330, Patek used a similar approach to the declutching module used for the rotor (3rd one from the top in the picture above and discribed in detail in c.). They have replaced the existing sliding flange (friction-based) by an Uncoupling Reduction wheel (see 1st one from picture above) that disengages the rotor from the barel (where the energy-supplier spring is) when the crown is pulled.

Patek has also modified the little “Stop-click” part preventing the barel from unwinding when it’s “charged”. In the 26-330, a new long helical spring was added to control the click action when back in blocking position (see the 2nd “Winding wheel” in the picture above). Previously, it needed some settings to perform the correct way (more reliable now).

We know the winding rotor with sliding flange is quite classical a feature even if it can differ from a brand to the other. However, here again, Patek has modified a mechanism that could be ignored as it’s already working well.

So, why spending time for this matter? Just because it can still be improved, even if we’re talking about an element which might look secondary.

The modification stands at the level of the plain wheel that you can see on the 324 caliber picture (fig.3) posted earlier at the beginning of the chapter (blue square). This element connects the gold rotor to the winding mechanism when rotating in one direction and disengages when moving the other way. The disengaging feature is here composed of several parts (blade, stopper etc…). As usual, the more parts, the more you have to go through a long setting process and may be facing reliability issues.

In the new 26-330 caliber, Patek has integrated all the parts in a single module doing all the work (see the 26-330 picture below, blue square). The new wheel is hollowed out and receives an octopus-shaped flexible star that simply bends and slides in one way (disengaged position) or clings to the main wheel when going the other way (engaged position for winding).

Again, this is quite easy a solution to understand, yet clever. This being said, it is still “a little” tricky to design and complex to craft at these dimensions. Compared to the former mechanism, it is more compact, more reliable and doesn’t need blade setting (strength, position).

Finally, the third noteworthy addition to the movement, a feature that many owners like to have in their watches and that was only available in a very few other Patek calibers: the Stop-second mechanism.

It uses a traditional blade that stops the balance wheel when the crown is pulled and that gives a little impulse when the crown is pushed back to help reactivating the escapement module. Not a revolution but quite welcome as owners were asking for it.

And finally, a view on the 5212A‘s 26-330 caliber where you can view these improvements (the stop-second isn’t visible from that side).

As mentioned in introduction, from 2019, the 26-330 caliber can be found in 4 models while the new rotor declutching module and no-play wheel display have been implemented in the 5520P through its new 30-660 Alarm caliber.

As I often like from Patek (29-535 chronograph caliber, 5650G Advance Research pushers etc…), many innovations are clever, useful, not gimmicky and as simple as possible. This latter element isn’t always associated with the first ones when brands start to show-off. Especially in this luxury sector.

Here, the improvements are mainly made to improve energy management, accuracy and reliability on many levels. Furthermore, it saves setting time and effort but also provides a nicer and fluid seconds-hand motion. It can only be more enjoyable for the wearer.

It is all about details and there are now new interesting things to observe on these calibers for sure.

There’s a very interesting video from Patek about the 5212 Weekly Calendar reference, dealing (from the 3:10 mark) with the 26-330 caliber. I really recommand viewing it:

You can of course find some additional information on Patek’s website, here: 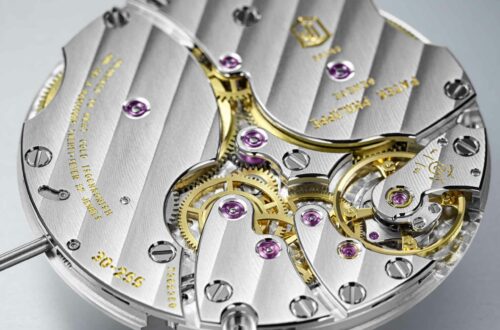