(The previous references unveiled during the 2022 Watches & Wonders week can be found here: Watches and Wonders – The Patek Philippe 2022 novelties)

It is not a Split-second Chronograph but a Chronograph with a 1/10th of a second additional complication based on a higher beating rate (5Hz i.e. 36 000 vph). This requires a better accuracy from the caliber (otherwise counting 1/10th becomes useless) and a very well managed energy consumption. You will see this isn’t a mere achievement when done the best as it can.

It is a very interesting breakthrough in the chronograph sector considering its unusual fast beat of course but especially for the improvements and innovations they brought from this movement to make it accurate, reliable and secured (shocks). More precisely, it is a movement showing their energy management mastery.

The 7 patents (summarized later) showcase what Patek has shown for decades: a constant use of available technique and knowledge to improve mechanical watches.

Nowadays, with computer-assisting softwares, we see more brands releasing Annual Calendars, Chronographs, Tourbillons, etc… Aside of the finishing standards which are “uneven” to say the least, it can have a negative impact on timekeeping. Doing a complication is one thing, but doing it right is another one that not many achieve to do. Indeed, it isn’t about reproducing on a well-known territory but researching new designs from scratch. The knowledge and mastery are often revealed in much more discreet areas, which is to say in the calibers’ conception.

You can take the Split-second chronograph isolator (5204), the different anti-backlash features (Minute-repeaters, Instantaneous jump, 5236), anti-shocks (this 5470P), setting designs (29-535 caliber’s patent), the 5650G‘s World Time “flexible” pushers, the internal and external bosses silinvar spiral (leading to a very high accuracy), the way functions are compacted (5959, the 5175/6300 Grandmaster Chime or even the 5930G…),  etc… They are all time-consuming, low marketing material (less spectacular than a neon-lit multi-direction gyroscopique tourbillon) but are the essence of what watchmakers are about: a constant research through the centuries for even the small (sometimes not so small) improvements to make timekeeping, reliability or convenience better.

Besides, let me add that a smaller compact size is a complication on its own for sure as miniaturization is a part of this art.

So, it isn’t only about a 1/10th of a second feature included in a watch. It is about why Patek Philippe stands where it stands today.

NB: I won’t go too much in details (I’ll try :p) and the pictures and video are from the official release.

We have discussions about the brand’s last decade asthetical evolution for one part of the collection (casual, more contemporary like the recent 5226/5326) whereas another side remains in the more classical trend. The 5470P-001 takes after the 5370 family, adding more modern colors and texture to the dial (like in the 5960G or 5172G for instance). The 41 x 13.68mm case is still in Platinum, with interchangeable sapphire and solid casebacks and a fold-over clasp.

As you see, the style is very sporty:

How do we read this?

On the picture a little below, the chronograph indicates 1 minute, 20 seconds and 0 1/10th of a second.

Each red marker is placed at the next second increment (thus coincides with the grey hand showing the exact plain second, indicated by a “cabochon”).

When the grey hand is between 2 different second ticks (i.e. 2 cabochons), then you should read the red hand to see on which mark it is (between 2 red marks).

Hence, we understand that each second of the chronograph, the 1/10th of a second should be facing a red mark on a different section of the 1/10th scale (there are 12 sections). No matter which section.

In fact, if they had made a single section, the hand would be traveling at 1 lap every second against of 1 lap every 12 seconds. This would have led to more wear and tear on the gears, especially when it stops.

On a practical level, the red marks also help the hours’ visibility. The fact we have 12 sections makes it more legible as they coincide.

What are those technical innovations

To start with, it is the first time Patek presents a 1/10th of a second chronograph. The caliber is formed with 2 overlaid chronograph mechanisms.

It is displayed via 2 central seconds hands: a standard chronograph second hand and a red one dedicated to the 1/10th only. In addition to the chronograph’s jumping minute hand of course.

In terms of conception, the brand chose to start from the Split-Second (Rattrapante in French) Chronograph manual-wound caliber (the 29-535 inside the 5204 reference). Indeed, there was already room in the central section dedicated to the Split-second function. Hence the “1/10th” mechanism replaces the Split-second one.

A vertical-clutch caliber (like the 28-520 caliber powering the 5960/5905 for instance) would have been nice in terms of shock management but, aside from the fact it is less appealing than a manual-winding chronograph, there was no room in the central area for the new function.

In fact, the picture above doesn’t show what it is all about. Going through all the displays implied in this caliber is a nightmare but shows why the project was started 10 years ago and could only be achieved now as crafting techniques evolved. Let me share some screenshots to give you just a glimpse about what is going on.

This heavy “1/10th” feature is fixed to the chronograph’s clutch lever. Hence, several features were added to handle that weight (more inertia when submitted to impacts).

You can see on the picture below, the micro-tooth pinion for the 1/10th hand as well as the “Pendulum” shock absorber feature. The pinion is made possible today thanks to the LIGA process (material growth from a Nickel and Phosphorus alloy), already seen in the new 26-330 caliber (the 324’s successor).

The following (double) 1/10th driving wheel (seen also above), thanks to the “elasticity” provided by the flexible parts, absorbs the hand’s stutturing and keeps wheels meshed together (shocks…).

The mainspring (stronger) was modified to provide the additional required power. Thus, its center attachment was reinforced.

The 1/10th of a second hand is special as well. It is made out of Silinvar for the first time for its lightness (lighter than Titanium) and rigidity. It represented a challenge also in the way it can’t be painted the normal way (ok, the “painting” matter isn’t the most impressive fact).

In the end, the new 7 patents are summed-up as follows:

About the Time escapement

Well, in order to match the timekeeping requirement to a 1/10th of a second feature, Patek Philippe has pushed the escapement performance (36 000 vph) by using the Oscillomax introduced in the 5550P Advanced Research in 2011:

These new functions require more energy as you can imagine. Thanks to the design of the caliber and to the Silinvar parts, they didn’t have to add another spring barrel or a more powerful one, implying more pressure on gears.

It sometimes looks “as usual” with Patek Philippe. We tend to get used to these significant improvements in many useful fields, while not being made for the gimmick show. We sometimes tend to compare different functions from different brands as if they were the same. However, while digging into the details we can see that there are real innovations, breakthroughs or more precisely long term improvements. On the other hand, you can find in the watchmaking world one-time tricks to show-off during the yearly fairs but which sometimes hide the fact they are just standard, sometimes lacking of efficiency hence a marketing ploy.

When these evolutions are serving accuracy, reliability, compact sizing on the long run, in the standard collections, then you see it is worthwhile. It is of course nice to have one-of-a-kind models, some very spectcular mechanisms as well, of course, but we shouldn’t forget that some are meant to be used as a daily wearer with a long term view. Each brick has to bring something, they aren’t meant to be removed after the show because they aren’t good enough. 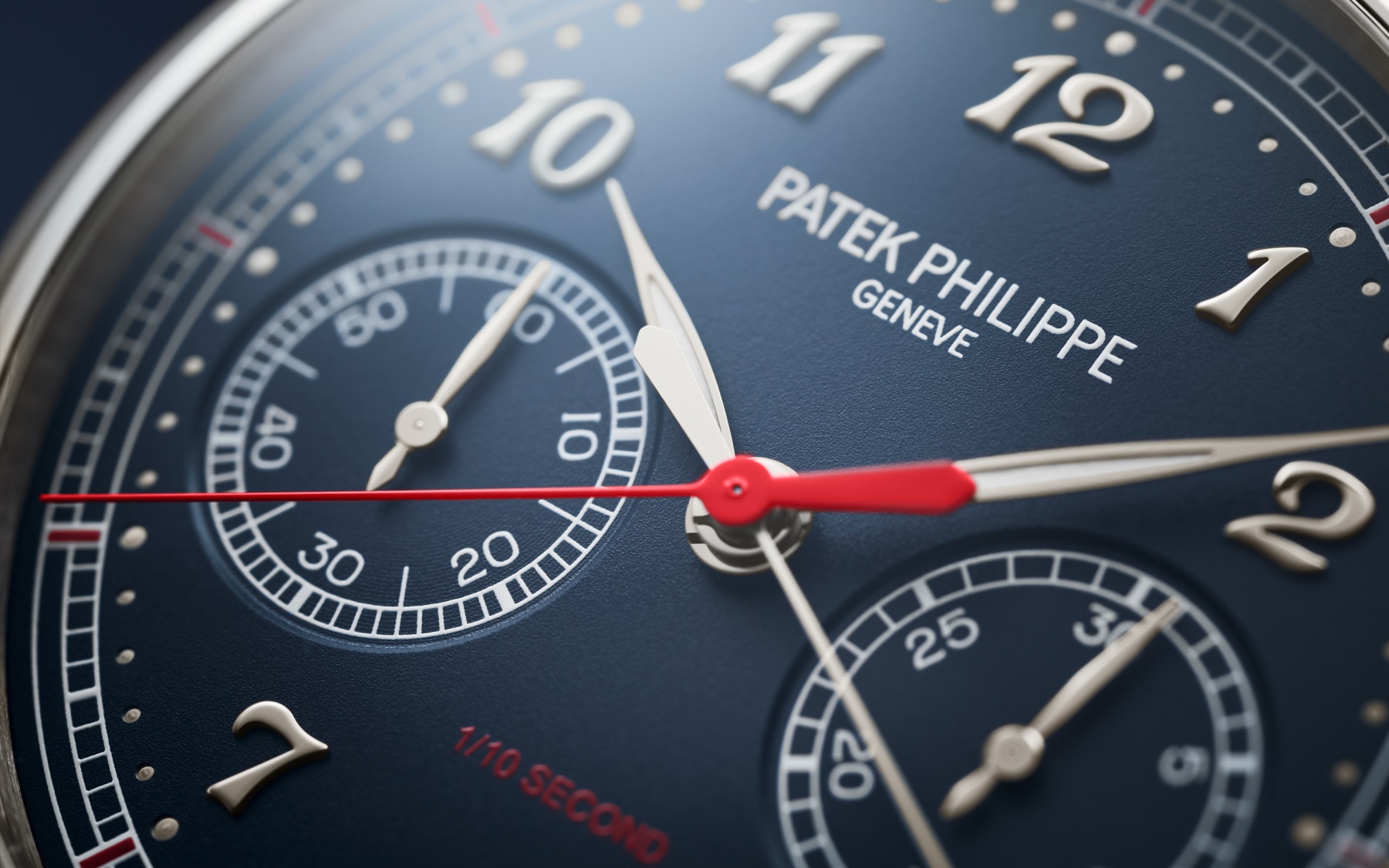 If we look back and consider what the brand has brought, if only recently for instance, the 150th anniversary innovations (Calibre 89, Minute-repeaters revival, 5175 Grandmaster Chime…), the Annual Calendar, the 29-535 (6 patents), the Advanced Research, the 26-330 upgrades and so on… Patek Philippe has proven to be ahead in many fields, especially in the mechanical development (settings, reliability, usefulness…), the compact sizes, as they try not to just implement a new function but to implement it in the right way, taking into account energy consumption, wear and tear, accuracy, etc… in the end “why”.

While the 5235 Regulator was also a timekeeping-orientated reference, or the 5650G Advanced Research and its new Spiral, this Patek Philippe 5470P 1/10th of a second Monopusher Chronograph brings the same kind of improvements in the field of the chronograph function. Adding a 1/10th of a second with a 36 000 vph paced caliber, requires a lot of work and knowhow to do it right. Especially in terms of energy consumption. The wear and tear is much higher and the interest to have such a function in a non-accurate caliber would be pointless. Hence, this project required a whole reflexion aside of the function itself in order to make its arrival relevant for a mechanical watch.

Official presentation video of the 5470P 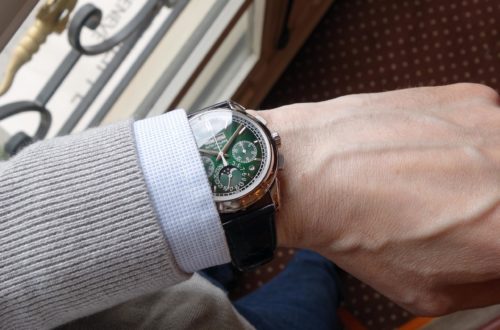 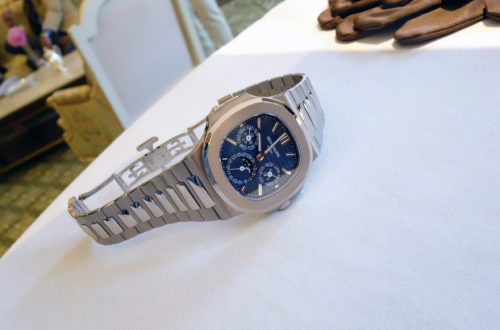 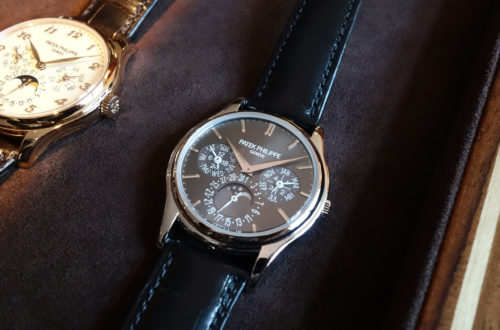